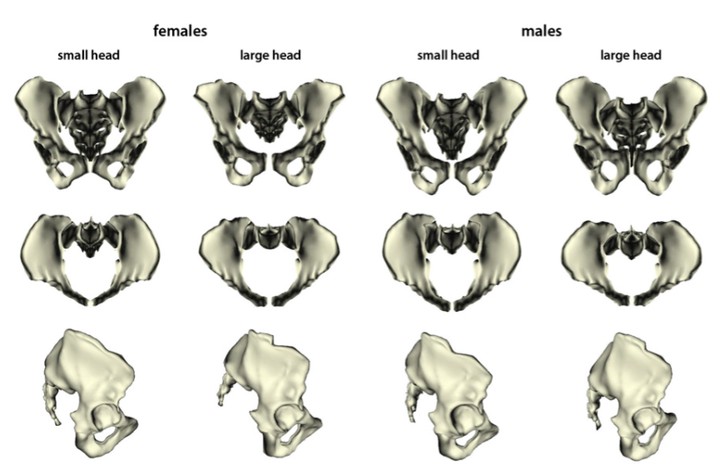 Compared with other primates, childbirth is remarkably difficult in humans because the head of a human neonate is large relative to the birth-relevant dimensions of the maternal pelvis. It seems puzzling that females have not evolved wider pelvises despite the high maternal mortality and morbidity risk connected to childbirth. Despite this seeming lack of change in average pelvic morphology, we show that humans have evolved a complex link between pelvis shape, stature, and head circumference that was not recognized before. The identified covariance patterns contribute to ameliorate the “obstetric dilemma.” Females with a large head, who are likely to give birth to neonates with a large head, possess birth canals that are shaped to better accommodate large-headed neonates. Short females with an increased risk of cephalopelvic mismatch possess a rounder inlet, which is beneficial for obstetrics. We suggest that these covariances have evolved by the strong correlational selection resulting from childbirth. Although males are not subject to obstetric selection, they also show part of these association patterns, indicating a genetic developmental origin of integration.