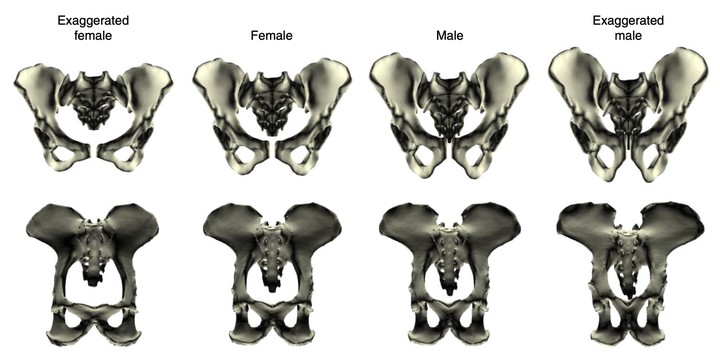 It is commonly assumed that the strong sexual dimorphism of the human pelvis evolved for delivering the relatively large human foetuses. Here we compare pelvic sex differences across modern humans and chimpanzees using a comprehensive geo- metric morphometric approach. Even though the magnitude of sex differences in pelvis shape was two times larger in humans than in chimpanzees, we found that the pattern is almost identical in the two species. We conclude that this pattern of pelvic sex differences did not evolve de novo in modern humans and must have been present in the common ancestor of humans and chim- panzees, and thus also in the extinct Homo species. We further suggest that this shared pattern was already present in early mammals and propose a hypothesis of facilitated variation as an explanation: the conserved mammalian endocrine system strongly constrains the evolution of the pattern of pelvic differences but enables rapid evolutionary change of the magnitude of sexual dimorphism, which in turn facilitated the rapid increase in hominin brain size.